Colleges have a responsibility to instill a green consciousness among their students. They are the ones who would be training future leaders, doctors, engineers, writers, scientists and artists, and young people while they are studying in an eco friendly environment will most probably try to include the green factor in their work and lifestyle. Many students also look for green campuses actively, as they already are quite conscious about their environmental responsibility. Here’s a list of some of the greenest college campus of the world which have boosted their sustainability practices:

9 Most Eco-Friendly College Campuses of The World

This university scores high on the Waste, Transportation, Infrastructure, and Setting areas. It has the ambitious aim of being carbon neutral by the year 2025. It’s probably the best green college in the world, as it has lived up to its commitments in almost every area of sustainability.

New buildings are designed to be energy and water efficient, and most of the waste is recycled. The older buildings are being retrofitted with eco friendly tech to make them more energy efficient. The students and staff walk, carpool, and use electric bikes or public transport to reach the campus.

This university is one of the greenest college campus of the world. It is ranked the best green college in Europe and the UK. It’s scores the highest for its Climate Change and Energy indicators. Transport and recycling are central to the college’s green efforts. The beautiful landscaped campus is home to numerous gardens and charming lakes. The campus has won many sustainability awards. The students run programs to make people aware about the sustainability.

Wageningen is one of the most environmentally friendly universities in the worlds. It managed to get the 3rd rank in the GreenMetric report, jumping 29 places! It has achieved high ranking for excellent Education. In the Netherlands, it is outperforming other universities. In 2015, the university achieved climate neutrality.Wageningen offers sustainability courses as a part of ‘Lifelong Learning’ program. A ‘green man’ goes about the campus, raising awareness of the environment. 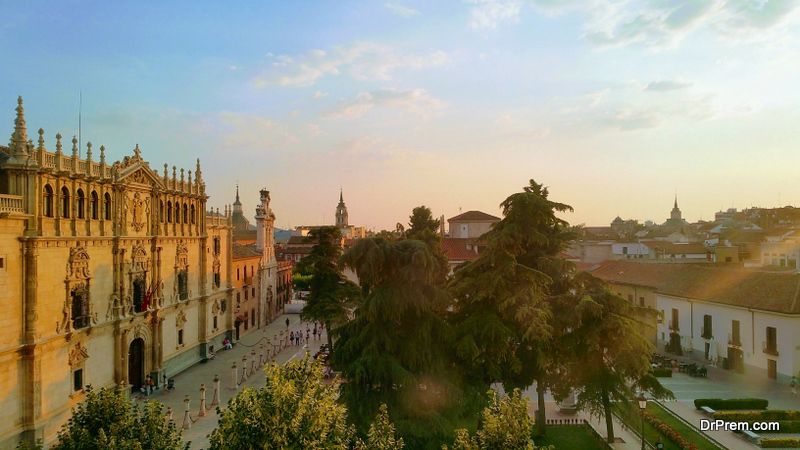 CoolMyPlanet has awarded Alcala University the third rank in the greenest college campus of the world due to its various eco-friendly sustainable initiatives. The university has a lot of green practices in place including recycling, transport, water and energy efficiency, which has made it one of the top sustainable universities worldwide.

They have several eco study programs, such as degree in environmental sciences, doctorates in space research and climate, and water resources management. It has won the top spot for the greenest college campus in Spain.

The university has earned a lot of acclaim due to its management of environmental resources available in the best manner. It has become an ideal for other Guatemalan universities to emulate.

The unique university features a building with a ‘bioclimatic’ skin. This outer skin can efficiently control the internal temperature of the building, reducing the energy consumption by as much as 62%, as well as water consumption by 90%.

The bioclimatic skin is composed of a number of openings/closings which are automatic. They work to maintain the temperature indoors between 16-30 degrees Celsius.

There are many plants inside to help regulate the temperature of every room, using certain plants to make the working spaces comfortable. All these features make this university one of the greenest college campuses of the world. 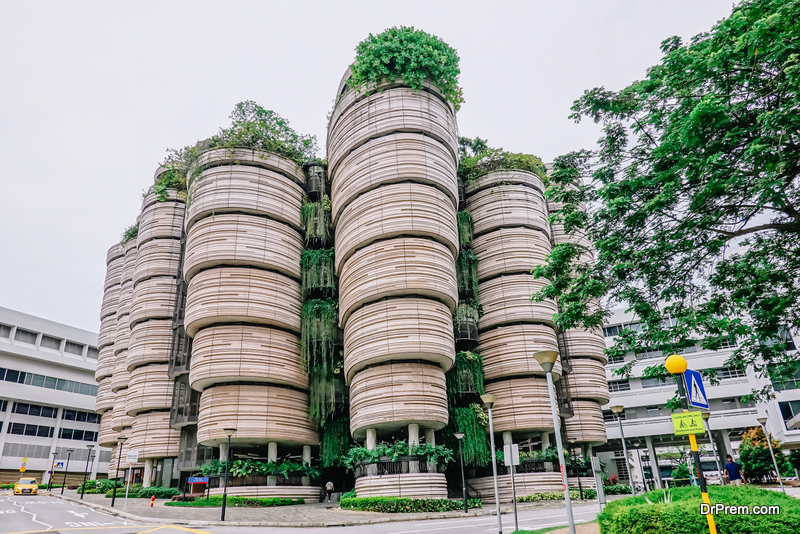 The firm Thomas Heatherwick Studio designed a spell binding eco-friendly building at Nangyang University, called ‘Learning Hub’. The students have named it ‘Dim Sum Towers’, as the building resembles a stack of bamboo baskets in which dim sums are made. There is no front or a back but the entrances are spread out in five levels.

The students have spaces to study and interact with each other. The firm worked with sustainability experts CPG and architect Ole Smith to ensure that they designed a sustainable building which met Singapore’s very high standards of Green Mark Platinum.

The coolest thing about the building is that it has no air conditioning. Instead it uses chilled water from a machine located on the exterior of the building, through pipes. The chilled air is circulated throughout the building via convection.

There is vast open space through the central atrium. Numerous plants have been planted on every level, which will eventually transform into a green curtain. NangyangCollege is among the greenest college campus of the world, as it has managed to capture the spirit of sustainability.

Connecticut University has been running ‘Office of Environmental Policy’ since 2002. It is now a comprehensive program which focuses on almost all the aspects of sustainability. It aims to improve the local ecosystems and natural landscaping, boost green purchasing and food production locally. To be the greenest college campus of the world, a college has to inculcate an eco friendly mindset in their students.

Connecticut University involves sports teams in recycling events. The co-generation facility helps to reduce its conventional energy use. The university has developed a plan with an aim to reach carbon neutrality by the year 2050. Water conservation is important here, and students and staff are always reminded in various ways about how to conserve it.

Another innovation worth mentioning is the building’s design uses the heat wasted from the computer rooms with another heat source to regulate the HVAC systems.

The Green Lighthouse is the first public carbon-neutral building in Denmark, which is a part of Denmark University. The building produces its energy via solar energy, district heating and heat pumps. This results in zero carbon emission and a vastly reduced carbon footprint. Denmark University makes the list of greenest college campus of the world due to use of ambient light and natural ventilation, and the unique green energy generation process.