In the last fifteen years, individual carbon footprints have grown steadily with the introduction of portable personal gadgets like the cellphone, the tablet, laptops etc. Keeping these gadgets charged through the day requires a lot of power but most of us fail to notice this fact. Charging gadgets on the go is also a big problem for iPad, iPhone and android owners. To solve both threes problems, Brian Warshawsky and Mike Lin created the Fenix âReadySetâ Solar Kit. The kit basically is a solar charger designed to provide users with a green charging alternative for their portable gadgets. 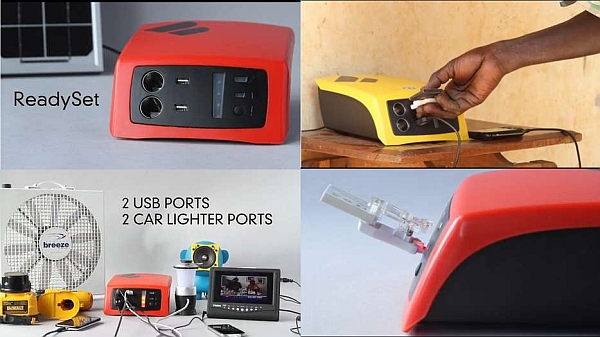 The Fenix International exclusive product is designed to be compatible with persona; electronic gadgets like portable lights, radios and music players, cellphones and tablet PCs. the ReadySet Solar Kit comes with a ReadySet battery to store the generated energy for future use while a rugged aluminum framed 15 Watt Solar Panel is used to generate power. To enable grid charging when sunlight is not available, the kit also comes with a power adapter to replenish the deviceâs battery.

The kit comes with a cable, switch and socket for a 3 Watt LED light. The ReadySet Kit is designed to be able to charge any 3.7-volt Lithium battery which means that it can not only recharge phone batteries but also batteries used in cameras and portable music players via its USB Universal Battery Charger. Two 5-V USB ports and two 12-V Car Lighter Adapter ports allow the devices to be charged quickly and on the go. The Fenix ReadySet Solar Kit is currently part of a Kickstarter project and will go into production once the funding goals are met. Part of the revenue generated from the sale of the ReadySet Solar Kit will also go to charities involved in poverty relief in Africa.