The general saying goes that one man’s trash is another man’s treasure. Recycling old and unwanted items can have manifold benefits for humans and the environment. In addition to making our surroundings cleaner and more hygienic, recycling can help offer a new purpose for items that would have ended in the landfill otherwise.

One of the main benefits of recycling unwanted or used items is that it helps individuals create fascinating pieces of art from practically nothing. Here are some of the best examples of recycled art that have gained fame for both their uniqueness and the materials that are used to create them.

Think of a mountain of bikes piled haphazardly above one another and you would probably understand what the Bike Arch is. Located in Black Rock Desert in Nevada, the Bike Arch was designed and developed by Mark Grieve and Ilana Spector.

Mark was apparently given the task of creating a unique entrance to an area of the park where bikers usually parked their bikes. And so, Black Rock Desert became home to the massive Bike Arch which housed over 300 bikes. Mark got the bikes from nonprofit bicycle organizations like Community Bikes (Santa Rosa), Trips for Kids (Miami) and Bici Centro (Santa Barbara).

The Bike Arch was taken down after a brief appearance at the desert and Mark has since then moved onto other recycled projects like the Wheel Arch (Ventura), Chrome (San Francisco) and Ride On! (Glendale & San Rafael). 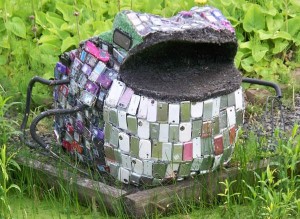 What do we do with a cell phone we no longer want? Throw it away probably! Not in the case of this artist though!

If you happen to find a polar bear made entirely of plastic floating around, you can guarantee that artist Tone Holmen is somewhere nearby. An eco-friendly artist from Norway, Holmen centers most of her work around global messages like climate change and its drastic effects on the environment. Holmen is also fascinated by glaciers and polar bears and accordingly, he decided to combine both themes in her most recent artwork.

She makes the polar bear body from chicken net, polystyrene and used wood. She then knots together several strips of used plastic bags on the chicken net to create the fur. The end result is magnificent and garnered rave reviews when it first debuted at the London Zoo. 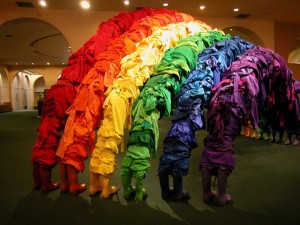 A group of Cuban artists, Neraldo de la Paz and Alain Guerra joined hands in 1996 to recreate beautiful pieces of art from discarded clothing. The group uses these clothes as their sole material in building several awe-inspiring and incredibly life like art pieces like trees, houses, furniture etc. 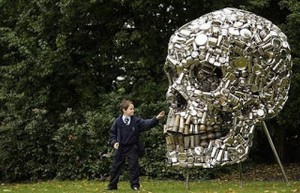 Designed and developed by Subodh Gupta, this particular art sculpture has been made entirely of kitchen utensils. Gupta usually uses items that he can easily relate to and often looks back at his childhood days for inspiration.

The Very Hungry God sculpture debuted in the year 2006 and is now owned by a French billionaire called Francois Pinault who has the largest collection of contemporary art pieces in the entire world.

Other notable sculptures of Gupta include a huge skull sculpture made entirely of kitchen utensils (stainless steel).