Green structures are the future of construction. Using materials which conserve energy and reduce the burden on conventional resources is what environmentally conscious architects and design firms are doing. Not only we should go green individually, as a community to we should make sure that we are heading in a sustainable direction. This includes opting for the government that supports sustainable policies also some companies facing bureaucracy, so they need paper assistance. Although as individuals we can do plenty in our personal lives, however, when it comes to the big changes, we need the support of the government. Time and time again, there are many instances when the country itself takes green initiatives. Construction of solar-powered bridges is one such initiative that requires the effort of the country and not just individuals. 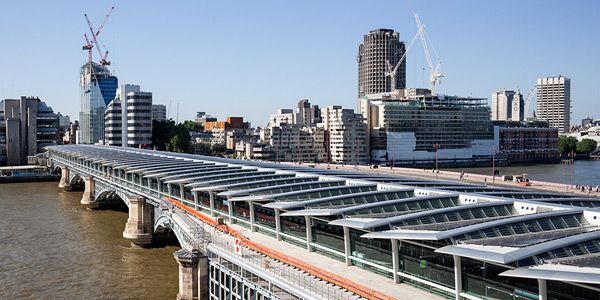 The Blackfriars bridge is the world’s largest solar-powered bridge across the river Thames. It derives its power from 4,400 roof-mounted photovoltaic panels. Furthermore, the Blackfriars solar bridge will cut down carbon emissions by an estimated 511 tonnes a year, as it will provide half of the station’s needs. The bridge took five years to be completed and now has become an iconic statement of renewable energy in London. 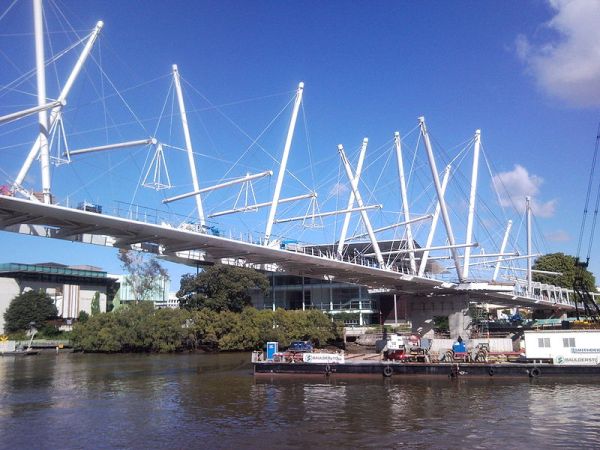 The Brisbane footbridge is the world’s largest footbridge which uses solar energy. 36,500 people are expected to use it every day, walking or biking across it. It connects the CBD and the arts precinct at South Bank. The bridge is 470 meters long, 6.5 meters wide and has a thickness of 25 com. Moreover, 80 solar panels provide the bridge with 100% energy, to light up its LED lighting system, which will be used for all kind of festive occasions. In addition, it can generate 100 KWh per day and 38MKWh per year and will cut down 37.8 tonnes of carbon emissions per year.  However, since it is connected to the grid, it can take or give back power as required. 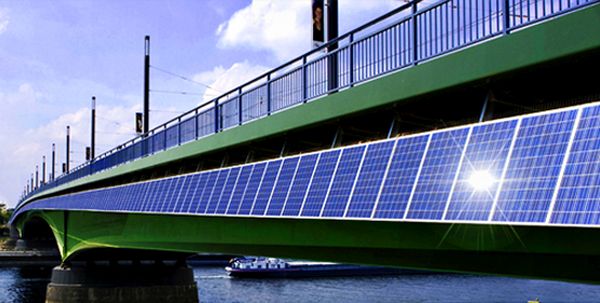 Across the river Rhein is the famed Kennedy Bridge. This bridge runs on the power of the sun, having 392 panels which provide 90KW and had produced 66MWh per year. It is a superb example of an energy-conserving sustainable bridge. 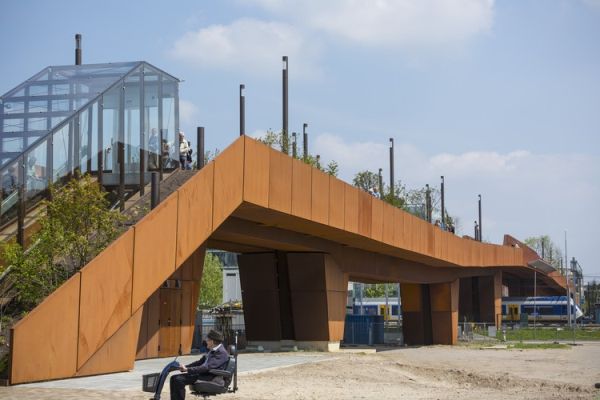 The Paliesburg pedestrian bridge is a bridge and park rolled into one. It is 250meter long and connects the historic center and the Paleiskwartier neighborhood, in the Netherlands. The bridge will also provide solar-powered energy to its neighboring areas. It has a giant solar collector which will keep the footbridge warm as well light up the LED lights. It will have savannahs like plants and trees. The materials used in the bridge enable it to have a lifespan of 100 years, at least, according to the architects. 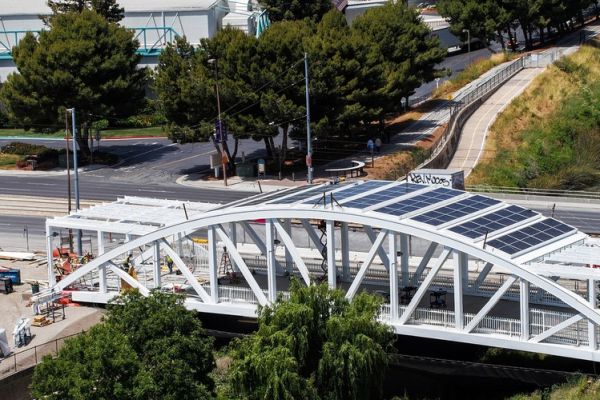 Levi’s Stadium is the current home of the San Francisco 49r of the NFL. It opened in 2014 to receive LEED gold certification due to its renewable energy features. It has a green roof and three solar-powered pedestrian bridges connecting the parking lots to the stadium. The bridges have hundreds of solar panels and along with the NRG Solar Panel green roof will generate 375kW, as much energy as the stadium will require on game days.

Steven Holl’s award-winning project will be a stunning addition to Copenhagen’s waterfront. The superlative design has two elegant photovoltaic-covered skyscrapers at the two ends connecting a sky bridge with wind turbines. Holl’s entry was unanimously the best entry in a contest to design a new gateway for Copenhagen. The Langenliline tower takes inspiration from the geometry of the old harbor and the Marmormolen tower. It will connect to the city through a wide main terrace and a public auditorium.

A public walkway which will be 65 meters over the harbor. It will line up by enough wind turbines to light up the buildings’ public spaces. The buildings have seawater heating and cooling systems, solar screens will provide energy for lighting and floor heating. The design will be loved by those who will be lucky to work in those building as the windows are operable for natural ventilation.

Not many individuals are aware of the term green construction technology. However, this also relates to the use of energy-efficient materials to construct homes as well as the use of energy-efficient appliances in these homes to make them more environment-friendly. Therefore, here is some information that would help shed some light on the topic. Given below are five excellent ideas for green construction that can be adopted by homes around the world. 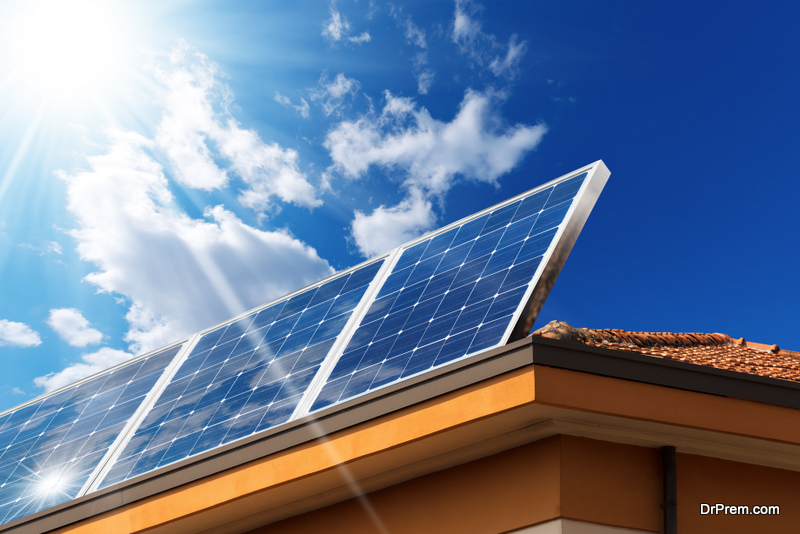 Solar panels do not need to be restricted to factories and fields alone. Neither do they need to be gigantic in size and require heavy equipment to work. While active solar panels would need the things mentioned above, passive solar panels can be used in homes to heat up the rooms during winters and can also be used to generate electricity for the appliances in the home.

Shingle roofs are prone to decrease solar reflectance, and can easily reach temperatures of up to 150 degrees Fahrenheit or more during the summer seasons. Cool roofs, on the other hand, would be able to reflect most of the solar heat away, thereby reducing the temperature by nearly 50 degrees. Furthermore, cool roofs would also trap the warmth or coolness inside homes, thereby reducing the energy loads experienced by heaters and air conditioners during winters and summers respectively. 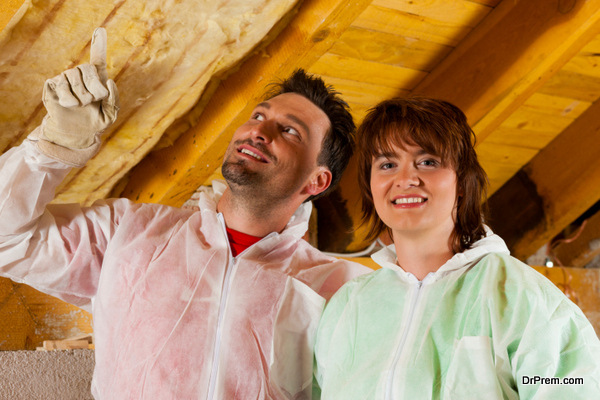 Water from heavy rains can cause erosion on a large scale in rural areas. This can be curbed to an extent with the help of storm water management which involves utilizing appropriate infrastructure and technology in urban areas to absorb this water and purify it. This way, the water collected from the rains can be reused for other purposes, and rural areas can breathe a sigh of relief, knowing they would not be washed away by these waters. 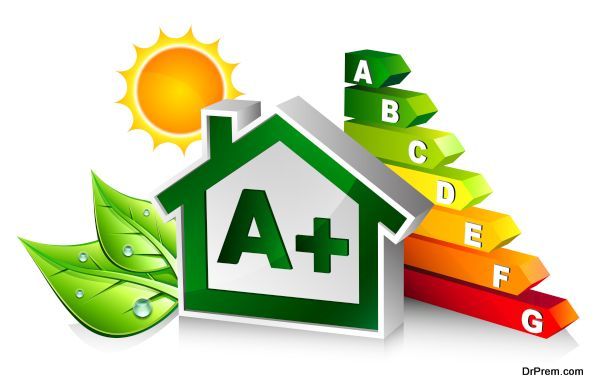 A zero energy home would be build in such a way that it could operate on its own without any help from an electric or power grid. The house would use renewable energy derived from onsite resources to power its appliances. As such, the house would enjoy ‘zero’ energy consumptions and ‘zero’ carbon emissions as well. In addition, the energy for the house can be supplied by renewable sources like wind or solar power.

The earth’s natural resources are reducing every day and our need for energy is increasing. Big infrastructure developers are the ones who can make a difference, who can plan projects for the future using sustainable energy alternatives. Furthermore, these giant solar-powered bridges should inspire big developers to think along the same lines as they have shown that solar energy can provide all the energy required, even for huge projects.