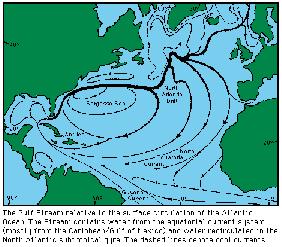 Shall we call it an oxymoron? Global warming that could trigger more severe winters and cooler summers across Britain and northern Europe, scientists warn. This is the consequence of the fact that the powerful ocean current that bathes the region in warm waters from the tropics has weakened dramatically in recent years. On a scientific expedition in the Atlantic Ocean, researchers measured the strength of the current between Africa and the east coast of America. They found that the circulation has slowed by 30% since a previous expedition 12 years ago.

The Gulf Stream is driven by the current that delivers the equivalent of 1m power stations-worth of energy to northern Europe, propping up temperatures by 10C in some regions. It has been found that the circulation has weakened by 6m tonnes of water a second. Previous expeditions to check the current flow in 1957, 1981 and 1992 found only minor changes in its strength, although a slowing was picked up in a further expedition in 1998. Although climate records suggest that the current has ground to a halt in the distant past, the prospect of it shutting down entirely within the century are extremely low, according to climate modelers.