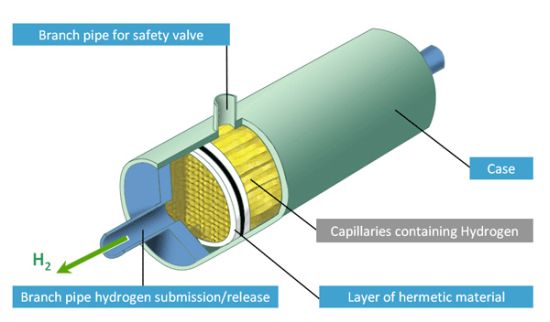 Though initially emerged as a feasible fuel for green vehicles, but was later discarded due to the risk of explosions and other drawbacks is back again to change the face of clean energy. Yes, I am referring to hydrogen, the element dismissed by labeling it unsafe. But, Israeli scientists have made a break-through by bringing it back as an environmentally safe fuel source. Hydrogen has been considered to be green for a simple reason that it burns without releasing pollutants and is also found in abundance, so could make a good eco-friendly fuel source.

But, as you know all good things come with their own set of drawbacks, this one too is no different. It is highly flammable in nature, hence bulks of the tanks are required to carry it and the lack of a refueling infrastructure is another problem. Bringing an answer to all these obstacles, experts from Israel are working at Geneva, Switzerland-based C.En Ltd. to develop small glass tubes called capillaries. Measuring slightly thicker than a human hair, the capillaries will then be bundled into a glass tube, known as a capillary array, which will not be thicker than a drinking straw in size.

The researches claim that some 11,000 such arrays will fuel a car for 400 kilometers. It will occupy less than half the space and weight of tanks currently installed in most of the hydrogen vehicles of today. The research might bring a smile on the faces of auto manufacturers like Honda, Toyota, and BMW, who are presently at various stages in the development of hydrogen-powered vehicles.