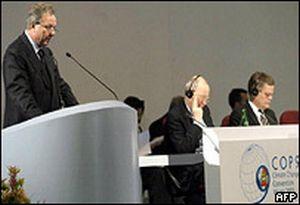 189 nations meet in Montreal to discuss how to combat global warming. The 10-day UN Climate Control Conference is considered the most important gathering on global warming since Kyoto, bringing together thousands of experts from 180 nations to brainstorm on ways to slow the alarming effects of greenhouse effects. But, what is Kyoto all about? Very few of us know much about it. Let’s scan through it in brief.

What are the Montreal talks?

It is the first big UN climate meet since the ratification of Kyoto Protocol. It will discuss the global climate regime post-2012.

What is the Kyoto Protocol?

It is the only international treaty to tackle climate change, setting target for industrialized countries to cut output of six greenhouse gases by 2012.

How many nations have ratified the Protocol?

36 countries are currently bound by the Protocol. The United States and Australia have opted out.

What are the key issues?

The key issues are the legal enforcement of the Kyoto Protocol, role of developing countries and a review of the adequacy of existing targets, including demonstrating progress in meeting them.

There is nothing much to expect. The main hope is to find a way to bring in developing nations under its ambit. But, United States and Australia reject it. Aussies want Kyoto to bind nations like India and China.

Environmental officials from 150 nations are members to the Kyoto Protocol. United States and Australia are excluded from talks.

How urgent are the talks?

Scientists say the earth’s temperature will rise by atleast two-degree centigrade this century due to the greenhouse gases. The ten hottest years on record globally have occurred since 1991. In that second period, global sea levels have risen by about 20 cm.