The recent water crisis in Chennai, India shows how people are thirsty even when they have water all around them. It might sound strange that almost three fourth of our planet has water cover on it, still, people suffer from a water crisis. Well, this is because most of the water on our planet is saline and it isn’t fit for drinking. Furthermore, to keep this salinity away from this water requires too much energy, which is ultimately not feasible. Therefore, it is necessary that we look for alternatives that provide us economically feasible ways of converting ocean water to potable water. Solar powered water desalination systems might be our best bet at the present. They seem a little unnecessary now, but in the near future, they would definitely turn out to be lifesavers. 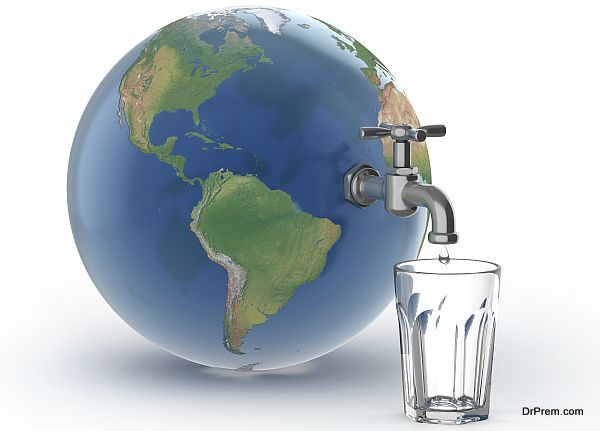 Only 2.5 percent of the total water available in the world is potable and already some one-sixth of the world population has an inadequate supply of clean drinking water. Although it isn’t that hard to deal with water pollution, waterborne bacteria cause the largest set of preventable diseases like diarrhea. The United Nations has made the right to clean water as one of its Millennium Goals.

The government is building Seawater desalination plants in coastal cities around the world to provide drinking water. The largest such plant is the Ashkelon desal plant in Israel. It has a capacity to produce 330,000 liters per day, meeting 5-6 percent of Israel’s total water needs. Gas turbines of 80 MW capacity provide the power needed. The total project cost is $212 million. In addition, the cost of water that the plants produce is 5.2 cents per liter, acceptable for an arid country like Israel.

Such large projects will take time and money to get built. Nevertheless, there are several innovative small capacity desalination approaches that scientists are conceptualizing for various applications. Perhaps the UN or other government agencies could fund the deployment of these low-cost systems in the water distressed poorer areas of the world. 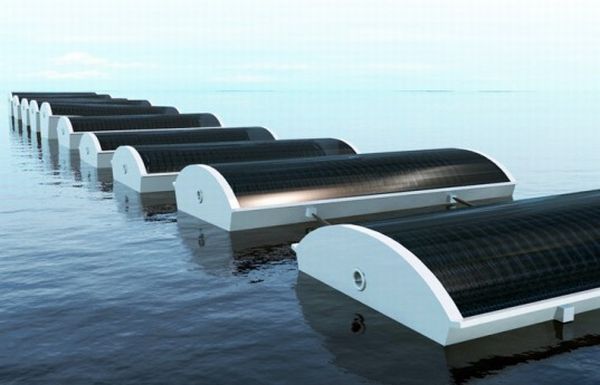 The Solar Cucumber is a concept one of the popular low-cost solar water desalination systems by the UK designer Phil Pauley. The design uses solar power and reverse osmosis to replicate nature’s water evaporation and condensation cycle. A series of floating plastic tanks called mini bus units anchor together on the seacoast. Seawater enters the lower compartment of the unit, with the plastic wall serving as the primary filtration unit. The salt water in the lower compartment pushes up against the reverse osmosis (RO) membrane. It separates the upper compartment of the mini subunit by the pressure of the outside seawater. Furthermore, the top compartment consists of curved transparent plastic that helps to direct sunlight on the water surface causing evaporation and lowering of pressure. Therefore, this pressure difference helps the RO process to convert salt water to potable water.

The capacity of each mini subunit in terms of liters of water per day has not been disclosed by the designer. The cost of the system appears low and the use of solar energy avoids additional costs. The use of plastic materials should result in a self-cleaning device. The designer also says stringing these minibus units along the coast will act as a natural reef. This would encourage marine organism growth. 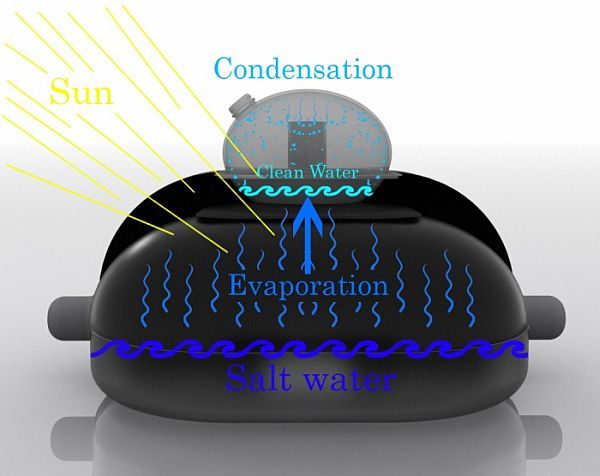 This concept by designer Joe Kasper is a simple distillation jar. The lower jar is full of seawater or other brackish water and kept in the sun. The solar energy causes the water to evaporate and the water vapor condenses in the upper jar as distilled water. The lower jar consists of black material to increase solar absorption.

The designer calls this device Haiti, after the island country that lies in the middle of the sea but has a severe drinking water shortage. One can also utilize this simple filtration device in urban slum areas to generate clean water from unsuitable ground or river water.

The C-Water is another solar distillation device , conceptualized by the Chinese designer Caho Gao. The device is a very simple molded plastic component with an open bottom and a sloping top. When the C-Water is placed on any wet surface including swamps, the sunlight causes the water to evaporate. The water vapor formed condenses on the inside the plastic component and the slope causes the droplets to run off into the container at one end.

The designer estimates that it would take about 47 hours to fill a cup of potable water. 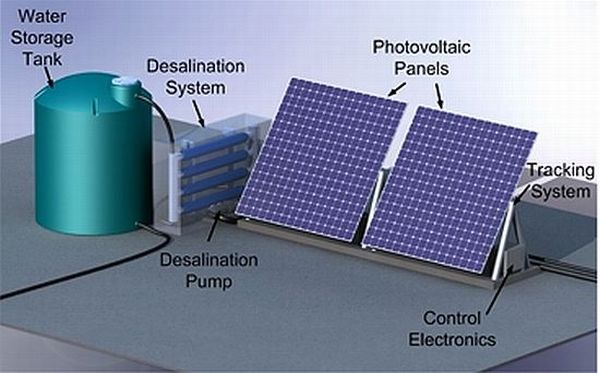 A team from MIT has collaborated with a team from the King Fahd University of Saudi Arabia to build a portable seawater desalination plant that can be quickly deployed to produce drinking water in natural disaster areas. However, the photovoltaic panels produce the electricity needed to drive the motors that pump seawater at high pressure through RO membranes. The membrane filters all contaminants and salt from the seawater, making it potable. A prototype to produce 80 gallons a day has been developed for testing. Moreover, one major advance being attempted is a control algorithm that can vary pump loads and regulate valve positions to make the plant operational even in cloudy conditions, when the solar electrical output is low. This avoids the use of storage batteries that are heavy and expensive. The unit is designed to be usable by non-skilled people.

The MIT team estimates that a 1000 gallon per day portable unit can be built for $8,000 cost. In addition, tyhe unit would be transportable in a cargo plane to provide quick relief in natural disaster areas where the power and water supply lines aren’t availible. 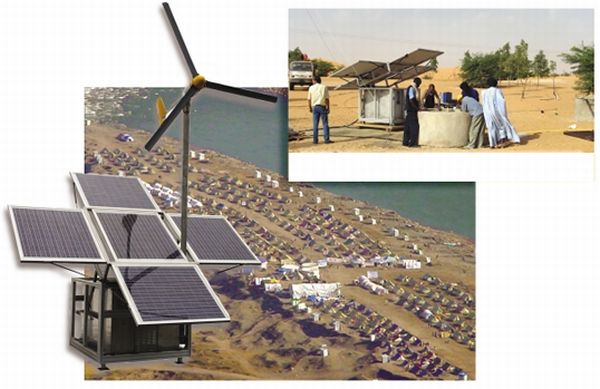 The Solar Cube is a self-contained portable desalination unit that can produce 1000 gallons or about 3500 liters a day. The Solar Cube aims its design for marine applications to generate potable water on board ships and barges. That system might soon become available for land-based applications. Furthermore, one unit of it was there to supply drinking water at an earthquake relief camp in Pakistan in 2005. The Solar Cube owes its design to Spectra of California working with Trunz of Switzerland.

The Solar Cube uses the proprietary ‘Clark’ pump that has two opposing pistons on a single rod to pump seawater through the RO membranes. The Clark pump uses only 13 watt-hours of energy per gallon which is about a fifth of the power the other pumps use. Furthermore, the pump motor works on 24 V dc so that power from a solar photovoltaic panel or a wind turbine which one can use without an Inverter. The Solar Cube costs around $ 16,000.

These solar powered water desalination systems might not work in the regions having no access to the ocean or sea water. Therefore, in such regions, people need to switch to eco-friendly innovations that can help deal with the global drinking water crisis.