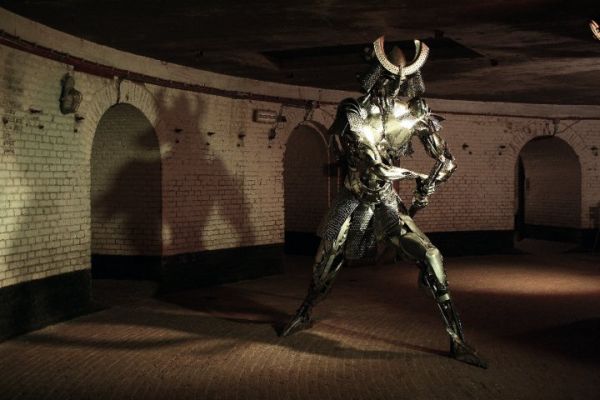 The Samurai, meaning knight, is the creation of Nikola Nikolov, who has used old washing machine drums to assemble this grand sculpture in armor. As the name “Samurai” suggests, a knight who can protect us or even turn against us if provoked stands true to the “green” theme as we must protect our environment or it will also turn against us.

Nikolov has received formal training in applied arts, and while working as a part-time dishwasher he used to collect the broken dishes and transform them into new works of art. From then onwards, Nikolov’s inspirations have always been discarded objects that he has salvaged, recreated, and preserved in a newer form. Likewise, his Studio-Re-Creation works toward giving a new shape to old memorable items and converting them into a desirable new product, still keeping intact the memories attached.

Recycling and reusing materials is not the only mantra of Studio-Re-Creation, but it also takes care of the sensitive and emotional sentiments that involve personal memories and belongings that would have otherwise been trashed. The Samurai is a fine example of how old used metallic washing machine drums, which would have probably been filling up landfills, have been given a new lease of life. The sculpture is very cleverly and meticulously assembled and welded. Nikolov’s “green” art is certainly an inspiration for designers to create out of waste!
Via: Studio-Re-Creation