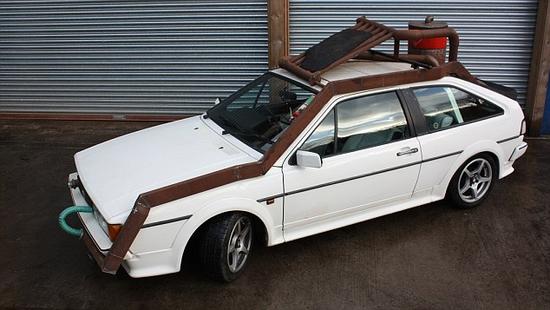 A team from the BBC1 science programme Bang Goes the Theory has unveiled a car that runs on coffee. Christened as Car-puccino, the car is actually a modified version of a £400, 1988 Volkswagen Scirocco. Well, the visible area of concern, for millions like me, is the running cost of the vehicle that has been estimated at between 25 and 50 times the cost of running a car on petrol. 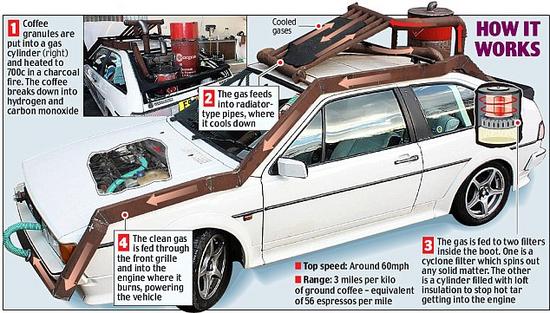 It will be displayed at the Big Bang science fair in Manchester before it sets out for 210 miles run between Manchester and London; on coffee-power, of course! The car will keep on asking for coffee granules every 30 to 45 miles since the early calculations shows it doing three miles per kilo or about 56 espressos per mile. 70 kilos of ground coffee required for the journey translates into £910 and £1,820. Did you say ‘extravagance’? Yes, it is, but ‘anything’ for environment.

Coffee, like wood or coal, has some carbon content so you can use it as a fuel. The coffee needs to be very dry and in pellets to allow the air to move through the pile of coffee as it burns. The brand doesn’t matter. 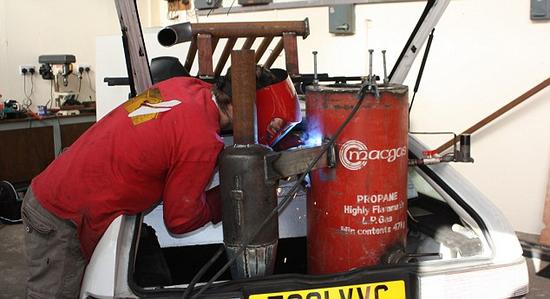 The car can effectively reach a top speed of 60mph. Still, the car will have to stop for routine clean out of coffee filters that would involve removal of the soot and tar. Consequently, the entire journey will take ten hours or so.