Most of us reckon disasters by their impact on human lives. However, we don’t usually consider the disasters that affect nature and not us. Nevertheless, many disasters like wildfires and volcanic eruptions have more impact on nature than the environment. In fact, if we compare the impact of the wildfires on the flora and fauna, these might easily outweigh that done by earthquakes and Tsunamis. We underrate their impact so much because we become conscious of only the worst wildfires. However, if we consider even the minor ones then they might be more frequent than any other natural disaster. 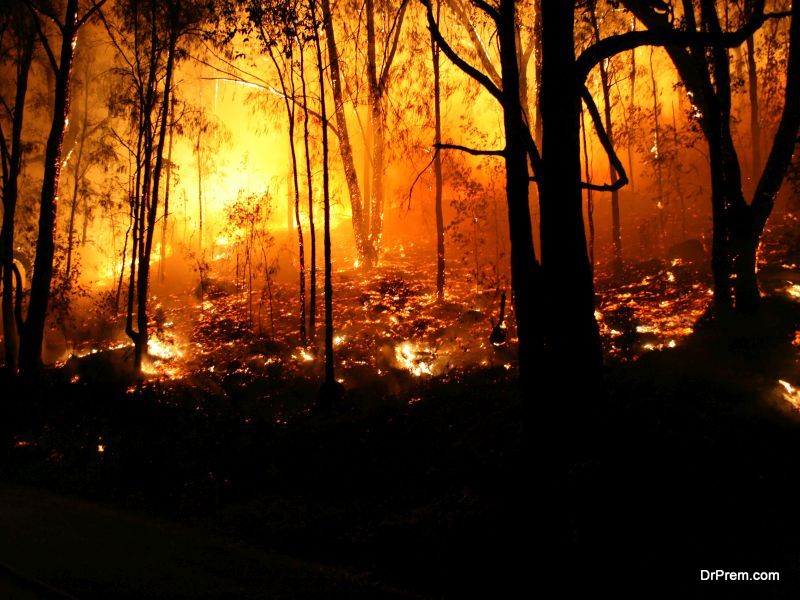 Wildfires are fires that cannot be controlled and destroy huge areas in their paths in a few minutes. The causes could be natural, different types of weather, dry underbrush, and wind. Moreover, wildfires may be caused by unintentional, or intentional behavior. In fact, someone could start one by throwing cigarette butts carelessly on dry grass. Burning debris, firecrackers or unattended campfires and car crashes are other fire hazards.

Nature starts terrible fires by lightning and volcanic eruptions. In addition, these fires ignite and spread quickly, making it impossible to stop them. Furthermore, millions of hectares of land burn down, causing great loss to the environment and people.

Wildfire leaves a trail of destruction behind them. Whole forests are burnt down along with the animals and birds that live in those forests. Moreover, even the nutrients in the soil are destroyed and humans living close by are killed, or suffer from smoke inhalation. The environment suffers greatly whenever there is a wildfire. 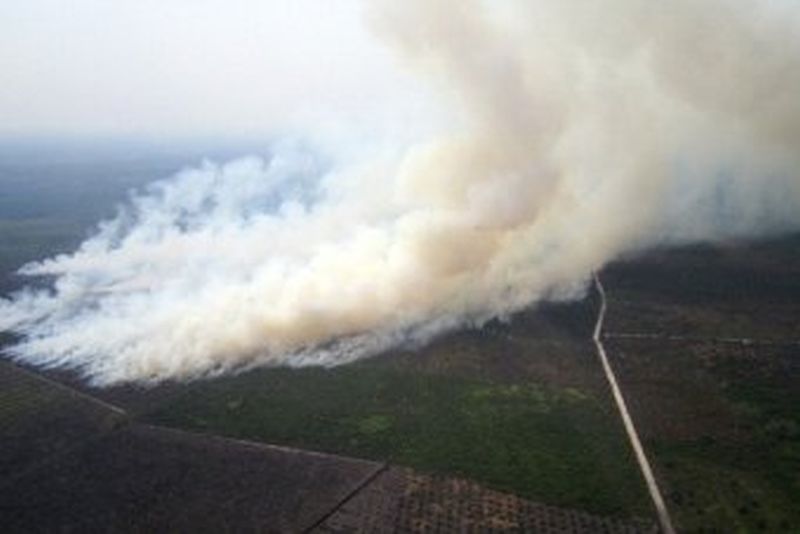 The 1997 and 1998 Indonesian forest fires were the worst recorded in two centuries. Therefore, the WWF called it a “planetary disaster”. However, the Indonesian government blamed climate change as the reason behind the fire. Another probable cause was the slash and burn technique used by farmers to clear land. The fire raised a haze of epic proportion where even the neighboring countries were affected. Later, the API index rose to 800, and over 200,000 people had to be hospitalized.

The Chinchaga fire was the biggest firestorm in North America. It burned in northern British Columbia and Alberta in the summer and early fall of 1950. According to local policy of that time, no measures were taken to stop the fire. Therefore, it created the world’s largest smoke layer in the atmosphere known as the “1950 Great Smoke Pall”, observed over North America and Europe, making people see blue suns and moons. In fact, even the animals felt the effect – cows needed to be milked at different times and birds were seen bedding down in daytime. 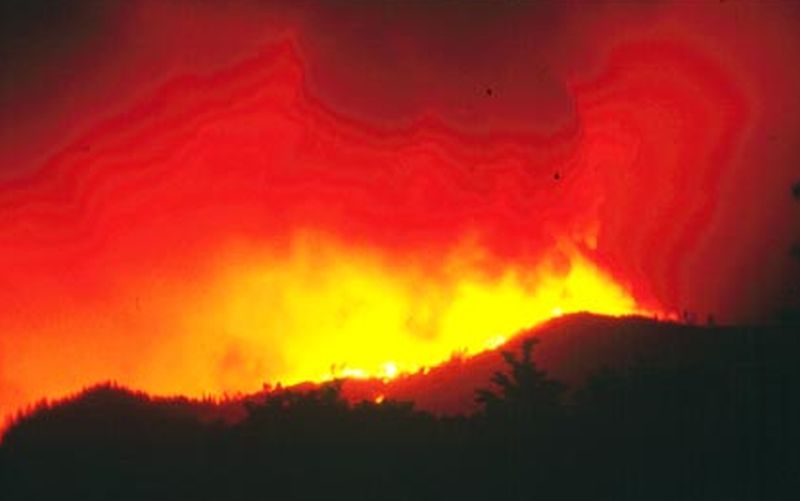 The Black Dragon fire occurred in may 1987 in China and the Soviet Union. It was the largest wildfire in China in 300 years, destroying one-sixth of its timber reserves. Moreover, 200 people lost their lives, 33,000 people became homeless, and it took 60,000 Chinese soldiers to put out the fire. In addition, the Chinese lost 3 million hectares of forest and the Soviet Union, which let the fire burn out naturally, lost 15 million hectares. 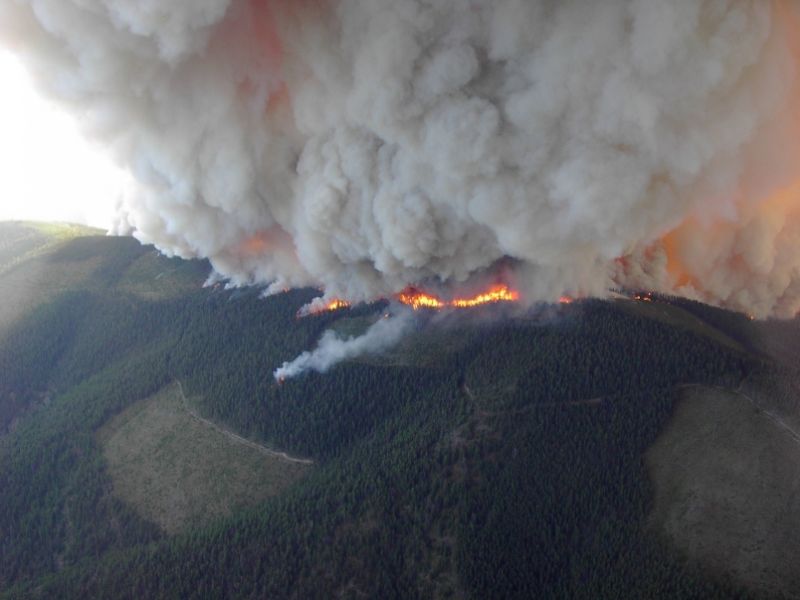 The Manitoba fires in 1989 in Canada rendered 24,500 people homeless and it cost the Canadian government over $68 million CDN to suppress. The fire was so intense that the ash and soot it threw up rained down like snow. People could not see houses next door. Airports had to be closed down as the visibility was so poor. A combination of dry weather and soaring high temperatures caused 1157 fires. Therefore, the Canadian government declared a general state of emergency to deal with the fires.

This firestorm lasted for two days and killed 87 people, mostly firefighters. It is said that the fire was started due to an extremely hot summer. This, in addition, led to an abundance of fire fuel and hot cinders flung from locomotives, sparks, lightning, and backfiring crews led to small fires raging in the region. On August 20, hurricane-force winds combined hundreds of fires into two blazing infernos. Moreover, the outcome of this wildfire was a new respect and awareness of forests as natural resources. 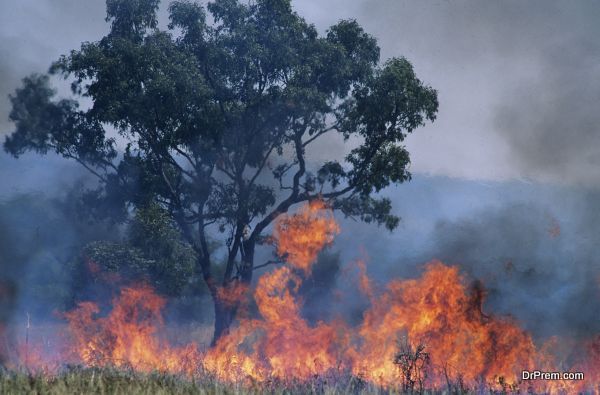 Fire researchers and historians consider this fire as one of the 10 largest in Canada’s history. On May 19th a wildfire broke out and ravaged the tinder dry boreal forest. The village of Lac La Biche was completely destroyed. Very few lives were lost due to the villagers who ran to the lake and covered themselves with wet blankets. In addition, the fire destroyed 2.8 million hectares of established forest reserves in that region.

These wildfires burnt down millions of hectares of forests destroying all flora and fauna, killed off animals and humans in their path, and demolished thousands of years’ old ecosystems within minutes. Therefore, they should be considered a lesson taught by nature to safeguard our natural resources.

Some interesting facts about wildfires

1. Fire “Tornadoes” can be caused by wildfires 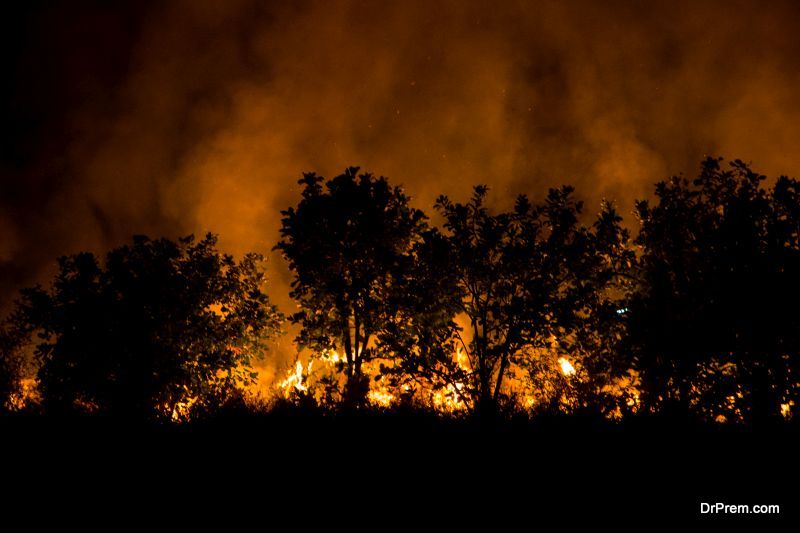 Fire tornadoes or fire whirls are rare but extremely destructive and are responsible for fires spreading rapidly. Furthermore, fire tornadoes can shoot as high as 1,000 ft and be as fast as 90 mph. It is extremely difficult to contain fire tornadoes as it is impossible to predict their speed and direction.

2. Most large animals escape from wildfires

Most large animals manage to escape from wildfires, as their instinct warns them of danger. Fewer animals perish in the fires than is usually thought. The animals which do suffer are the animals that are not very mobile, like small insects and rodents. Wildfires are dangerous to wildlife after the fire is controlled because of smoke inhalation. Animals suffer from the destruction of the natural habitat for food sources and landscape.

3. Some forests need fires to survive 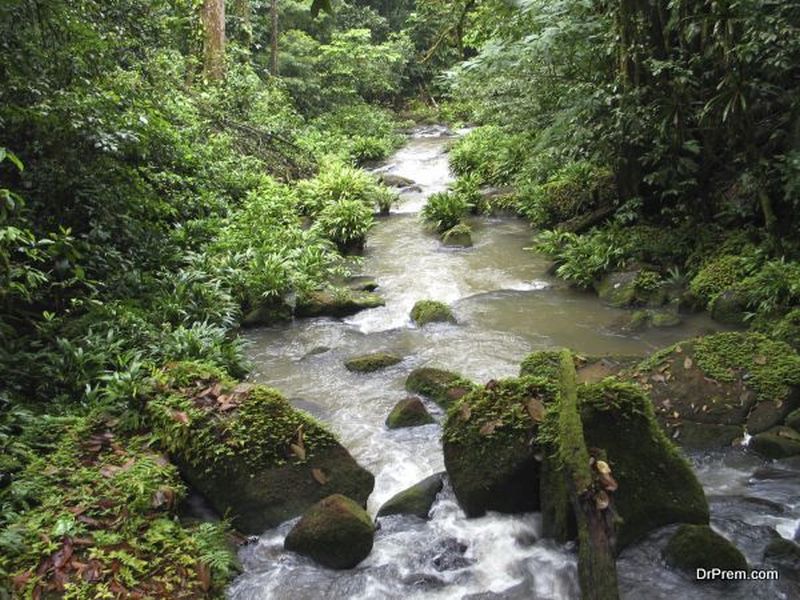 It’s surprising but true! Some forests, like the lodge pole pine forests depend on fire for survival, as the lodge pole cones need fire to get them to open, to release the seeds inside them.

Ponderosa pines also benefit from ground fire occasionally, to clear the floor of the forest of young trees and grasses.  But repeated fires can damage sagebrush, which is important for the eco-system.

4. A kind of beetle thrives in wildfires

The beetles belonging to the Melanophils subgenus use infrared radiation sensors to find out the location of burning forests. Once they detect the desired inferno, the beetles mate and eggs are laid inside the scorched trees. They prefer dead trees as these trees have no defense mechanisms such as sap to prevent insects from burrowing inside the trees. 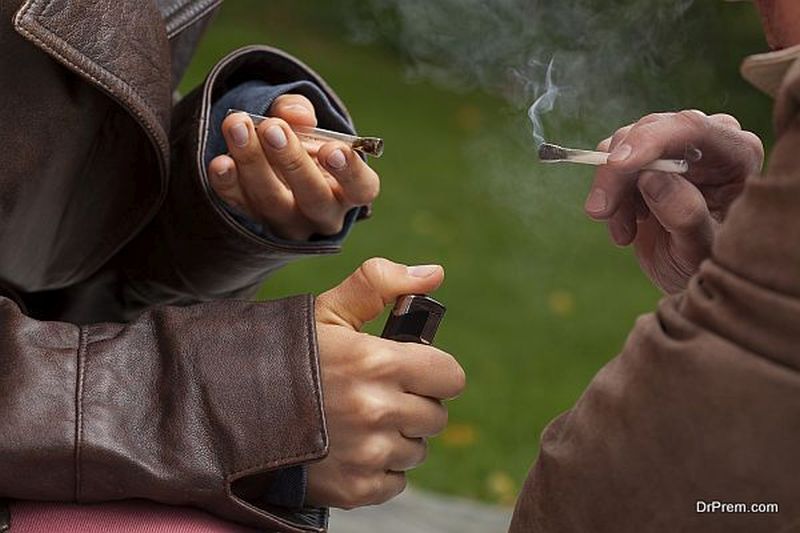 80% of wildfires are caused due to mistakes made by humans. Discarded cigarettes, unattended campfires are some causes of wildfires starting due to humans. These wildfires destroy huge acres of forests and put animal and human lives in danger. A little carelessness on the part of humans can cause tremendous loss to the environment.

Wildfires can start spontaneously because of accumulation of dead leaves, trees and twigs which can create intense heat. This heat can cause spontaneous combustion and cause a wildfire.

7. Wildfires are also caused by lightning 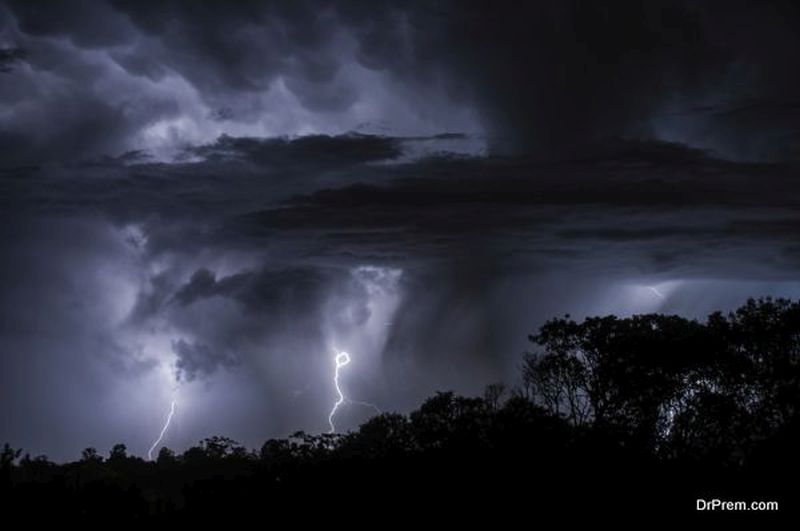 The earth is struck by lightning over 100,000 times in a day, and 10-20% of lightning strikes have the potential to cause wildfires.

8. Climate change can cause more wildfires

A study determined that climate change may increase the risk of wildfires. The drier and hotter climate may increase fire activity in forests and grasslands. Climate change would have the opposite effect in deserts and ice caps. The effect of wildfires might vary according to the location and environment, but forests in northern latitudes such as the western part of the United States may see an increase in wildfires. 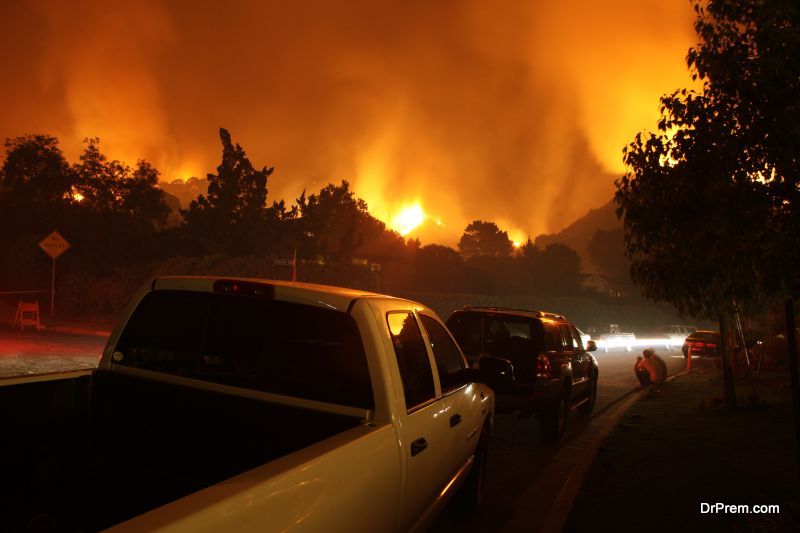 The way a wildfire behaves depends on the prevailing weather conditions, amount of moisture in air, amount and type of fuel which is available to the fire, and topography of the area. If there is more dry matter, there would be more fuel than live plants which burn less as they are filled with water.

10. Wildfires can produce their own weather

Large fires can create their own winds too. The fire heats up the surrounding air which rises upwards. Moreover, the cool air which rushes in replaces the hot air and creates wind, increasing oxygen supply to the wildfire.